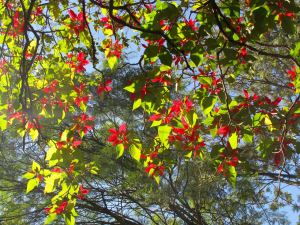 This is our cold season: Kenyans wear woolly hats, scarves and gloves, and say it is “baridi sana” (very cold) – as the daytime high is just 22C and it can get right down to 14C at night. Also, the poinsettias are flowering on the compound, and look very Christmassy – except that they are 20’ high trees!

July and August tend to be quieter months for counselling at Tumaini as people take holidays, go on home assignment, etc. But it is a useful time to catch up on other background tasks that are less exciting, though still important.

We have been making good progress on planning for the new counselling centre in Kampala. It is now less than two months until Judith arrives in Uganda to begin the work of setting this up! We think it will be early 2016 before the centre is open for counselling – first there is suitable premises to be found, one or two national staff to be appointed, and the infrastructure to be put in place. It’s exciting to see how this is coming together after the original idea back in early 2014. (There is an apt saying which we find useful to remember in Africa: “Things take longer than they do!”)

We have been doing quite a lot of putting feelers out for additional staff. We have had a few ‘nibbles of interest’, which is encouraging, but please pray that the right people would commit to applying and coming at the needed time.

Life on the campus is very quiet during the second half of July and for the month of August. Some of my students are not around; their husbands have graduated and returned to their own home or country or they are visiting family during this break.

I am still teaching three ladies who have asked me to continue over the summer but it is a bit hit and miss; the students often have personal circumstances that lead to lessons being cancelled.

The new semester begins in September, but last year it was two or three weeks before my classes got underway. The university has recently set up a Language Centre and plans to run classes for English, French, German, Swahili and Arabic. At the moment, some empty rooms have been allocated, tables and chairs, bookshelves and a few English teaching resources that have been donated from the USA. The coordinator has asked me to come on board to teach English. These fee-paying classes would be for theological students of the university. Meanwhile, I still hope to offer English to those who are not students and cannot afford to pay fees for a course. This generally means wives of pastors who appreciate the lessons, not just as an opportunity to improve their English but also as a social / fellowship time. When they arrive on campus, they may have just left their home country for the first time, and appreciate being part of a support network. I need wisdom to know how to respond to the request from the Language Centre.

Just like the classes, there are no meetings at this time of year and we will start again in September. Following the meetings that I led from May to July, I was very excited when two of the ladies approached me and asked if I would do some sessions with them on how to lead a Bible study. I am so pleased that they want to do this. This is real progress in equipping them in their role as pastors’ wives.

Sometime last year we included in our blog a picture of Joseph, a gardener where we live, and with whom we have become friends. We had previously given him a Swahili Bible.

Let me tell you a short story about Joseph from last month. He earns a tiny salary, barely more than the rent on his tin shack, that is home for him and his family – except (like all the staff) he hasn’t been paid since March. His wife earns a little by doing some cleaning, and they have 3 teenage children at school, and a fourth child who became part of his family when a relative died. Having not been paid, he just survives by washing cars and anything else he can do on top of his gardening work, which he continues in the hope of being paid someday.

When an American woman, who was visiting, saw Joseph gardening and the careful work he was doing, she got chatting and then surprised him by giving him 1,000KSh (about £7). Joseph could have fed his family with this for about a week (on ugali – a stiff maize meal ‘porridge’). However, he went straight to the campus bookshop and bought a Bible in the Luo language to give to his mother, as she speaks neither English nor Swahili. He showed it to us very excitedly that evening! We knew he had no food in the house, but we also know that he didn’t go hungry.

Here is a picture of Joseph’s wife, Agnes, and two of their daughters – dressed in their very best – when they visited us recently. The girls were very happy to have found some edible fruit on a tree near our apartment.

During the last year or so, Africa Inland Mission has been refining its vision for the next five years; yes, it’s called Vision 2020!   The first stage was to renew and concentrate AIM’s vision on evangelising unreached people groups, to disciple believers, to train and disciple church leaders through theological education, and to provide good support services to those working ‘in the front line’ – which is the part of AIM under which we work.

Now our International Director has just communicated the specifics of this plan to us all. Amongst other things, this sets out the 20 particular African people groups AIM will work to reach with the gospel by 2020, to seek 400 African missionaries to be involved in this outreach, and to equip 4000 African church leaders to establish and strengthen Christ-centred churches.

We all know this is a big vision, which can only be achieved by God’s grace – so please pray! We are excited and privileged to be a part of this work.

Two of the prayer requests in our last blog were answered together in an unexpected manner within 24 hours of posting our blog. We asked for prayer concerning a new tenant in our home in Sawston, and also for somewhere to live while on home assignment from Christmas to the end of April. Well, our son Andrew and his wife Fiona contacted us to ask if they could move to our home, as they needed somewhere larger due to expecting their second child in November. After thought and prayer we agreed. So this means that we can stay with them in our own home while back in the UK! And we can also catch up with our grandchildren – but can we remember how to change a nappy? Anyway, we are very glad to be able to help them, as they also help us! 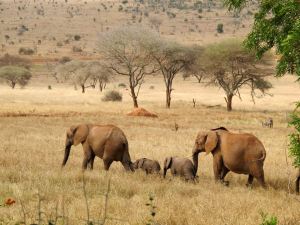 We took a week out in July and went to the south-east of Kenya. We saw a lot of wildlife, including these beautiful elephants; the picture was taken from our loungers by the pool at our safari lodge!

Bug of the month 2

Finally, bug of the month: